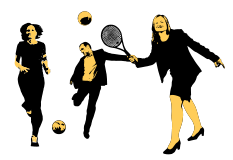 The agency focuses on singers, conductors and directors, some of whom are partly or even completely represented worldwide. As globalization expands into the field of classical music, the owners’ view on the small and medium sized agencies situation is a process of continuous changes that’s rapidly accelerating.

Boris Orlob Management cooperates with leading agencies to provide their artists with a worldwide and renown standing. Apart from that, the managers focus their efforts on the promoters as well. The agency’s aim is to provide fast, reliable and qualified advice. Boris Orlob and his sister Natascha van Randenborgh (born Orlob) come from a family of musicians.

Following the first ambitious attempts as a drummer in a hard rock band, Boris Orlob early discovered his enduring enthusiasm for opera and singing. After passing his A-levels at the German School in Barcelona and graduating in Business Studies, Media Studies and Cultural Management at the Freie Universität Berlin, Boris Orlob worked as head of the singers’ department with the concert agency Matthias Vogt in Munich. In 1997, he established his own agency in Berlin (Boris Orlob Management) which he today co-manages with his sister, Natascha van Randenborgh, and which represents a wide range of singers and conductors.

Further, Boris Orlob is a member of the opera committee of the IAMA and has given lectures at the Hochschule für Musik Hanns Eisler Berlin, the Internationale Meisterakademie Neumarkt as well as the Bertelsmann Foundation’s ‘Neue Stimmen – Creating Careers’ program for young, aspiring singers.

After passing her A-levels at the German School and concluding her vocal studies in Barcelona, Natascha van Randenborgh has been engaged for three seasons by the Opera Choir at the Deutsche Oper am Rhein in Düsseldorf, Germany. In 1999, she decided to dedicate herself to the profession of artist manager.

After studying German, Literature and Singing in Iceland, Ingunn Sighvatsdóttir moved to Munich in 1994, where she gained her first management experience at the KünstlerSekretariat am Gasteig. From 1998 to 2011, she worked in Italy, in the first years as assistant and personal manager of the piano duo Katia & Marielle Labeque in Florence, subsequently as artist manager at Prima International and later on at Stagedoor in Bologna. In September 2011, she joined Boris Orlob Management as artist manager.

We do not hold general auditions, but you can send your application exclusively via e-mail to info (at) orlob.net (max. 7 MB) with your CV, a picture and a link to an audio-example (like YouTube or your homepage).
Furthermore, we ask for your appreciation that we will only contact you in the event of being interested in your artistic material.


With links to the expert talk and OpenMasterClass