The Munich born and raised tenor Vincent Wolfsteiner studied at New England Conservatory with William Cotton and made his debut as Rodolfo/La Bohème at Grantite State Opera, followed by engagements including roles, such as Don José/Carmen, Turiddu/Cavalleria rusticana, Coraddo/Il Corsaro and Canio/Pagliacci in Massachussets, New York, Florida and New Hampshire.

Following two seasons (2012-14) as a permanent member of the ensemble at Staatstheater Nuremberg, Vincent Wolfsteiner became a member of the ensemble at Opera Frankfurt, debuting in the title role of Verdi’s Otello. Since then, he performed all major tenor roles in Wagner’s Ring cycle, the title roles Tristan und Isolde, Lohengrin, Peter Grimes and Andrea Chénier, Erik/Der fliegende Holländer, Calaf/Turandot, Luigi/Il tabarro, Maurizio/Adriana Lecouvreur, as well as Filka Morozov/From the House of the Dead. Last season, he sang Bacchus/Ariadne auf Naxos and Tambourmajor/Wozzeck at Oper Frankfurt, and Hüon/Oberon on the occasion of his house debut at Theater an der Wien. Furthermore, he performed the title role of Wagner’s Tristan und Isolde at Staatsoper Unter den Linden Berlin under the baton of Daniel Barenboim, as well as Siegmund/Die Walküre at Bayreuth Festival. In the 19/20 season Vincent Wolfsteiner made his celebrated role debut as Herodes/Salome at the Staatsoper Unter den Linden, whereafter he sang Tristan in the new production of the Oper Frankfurt under the direction of Sebastian Weigle.

Vincent Wolfsteiner is active as a concert singer, as well. His repertoire includes key works, such as Mozart’s Requiem, Beethoven’s Symphony No 9, Mendelssohn’s Elijah and Die erste Walpurgisnacht, Schumann’s Faust Szenen, as well as Mahler’s Symphony No 8 and Das Lied von der Erde.

Upcoming engagements in the 20/21 season include Herodes/Salome at the Vienna State Opera and the Bolshoi in Moscow. Additionally he will make his debut at the Bavarian State Opera as the 1st armoured man in the Magic Flute. In spring 2021 he will return to the Oper Frankfurt as Siegfried. A planned engagement as Tristan in autumn 2020 was canceled due to the Covid pandemic.

Salome with a star cast at the Bolshoi
On the 25th of February, the premiere of Salome, directed by Claus Guth and conducted by Tugan Sokhiev, will be celebrated at the Bolshoi in Moscow. With Asmik Grigorian in the title role, Vincent Wolfsteiner sings Herod for the first time in the Russian capital after his guest performances at the State Operas in Berlin and Vienna. 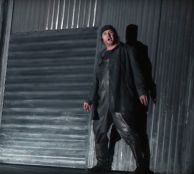 
"His high, pleasant tenor easily managed the part, for a fully satisfying performance."