Nadja Loschky studied musical theater direction at the Hanns Eisler Academy of Music in Berlin.
Parallel to her studies, she assisted Hans Neuenfels and worked as a freelance director at the Municipal Theater in Osnabrück. In the following years, the first productions in the field of children's and youth theater were created under her direction at this theatre.
In 2006 her interpretation of Fried's monoopera The Diary of Anne Frank was invited to the Theatertreffen der Jugend in Berlin. Further engagements followed, including at the Staatstheater Kassel.

Following her practical diploma examination in 2009, Nadja Loschky staged La Traviata and Il barbiere di Siviglia at the Osnabrück Municipal Theater and Charles Gounod's Faust at the Kassel State Theater. In 2011 she made her debut at the Komische Oper Berlin with the premiere of the family opera Mikropolis by Christian Jost. The following year, Britten's A Midsummer Night's Dream was staged at the Kassel State Theater, Die Entführung aus dem Seraglio at the Heidelberg Theater and the family opera Die Schatzinsel (Frank Schwemmer) at the Zurich Opera House, followed in 2013 by Simon Boccanegra at the Aachen Theater and Handel's Alcina at the Lucerne Theater .
In 2014 she took Così fan tutte again to the Theater Heidelberg and with Madama Butterfly she staged her first Puccini opera at the Theater Bielefeld. For this production she was awarded the Götz Friedrich Prize in 2015.

In the same year she worked again at the Zurich Opera House and premiered Christian Jost's Rote Lanterne. She then staged Boiledieu's rarely performed opera La dame blanche at the Oldenburg State Theater and Le nozze di Figaro at the Heidelberg Theater.

In 2016 she presented herself again at the Lucerne Theater, this time with an interpretation of Norma.
For her production of Death in Venice by Benjamin Britten at the Theater Bielefeld, which was created in the same year, she received a nomination in the annual issue of the specialist journal "Opernwelt" in the category 'Best Director'.
She also staged Verdi's Macbeth at the Oldenburgisches Staatstheater, Zingarelli's Giulietta e Romeo at the Schwetzingen Baroque Theater and L'incoronazione di Poppea at the Bielelfeld Theater. In 2018 she made her directorial debut at the Graz Opera with Ariane et Barbe-Bleue by Paul Dukas.

In the same season, Nadja Loschky became resident director at the Bielefeld Theater, where she staged Rihm's Jakob Lenz and then opened the 2018/2019 season with La Traviata.
In spring 2019 she made her debut at the Cologne Opera with Rusalka and in June of the same year her interpretation of Offenbach's Orpheus in the Underworld was seen at the Bielefeld Theater.

Since then, she has continued to cause a stir with her productions of The Passenger in Graz and The Birds at the Cologne Opera. In the 22/23 season she is directing Thomas Hamlet at the Komische Oper Berlin.

Since the 2019/2020 season she has been the director of the music theater at the Theater Bielefeld, and from the 23/24 season she will take over the directorship of the house.

In addition, Nadja Loschky is a lecturer at the Hochschule für Musik „Hanns Eisler“ and the Universität der Künste Berlin. 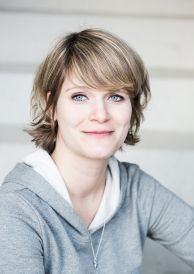