Matija Meić was born in Zagreb. He studied at the conservatoire »Blagoje Bersa« with Viktorija Badrov, at the academy of music Zagreb with Giorgio Surian as well as at the University of Music and Performing Arts Vienna with Claudia Visca.

In 2010, the young baritone won the international singing competitions such as the »Bruna Spiler« in Herceg Novi, Montenegro and in 2013 the »Iuventus Canti« in Slovakia. In the same year, he was awarded as »Young Singer of the Year« at the Molto Cantabile competition in Zagreb. In 2014, he was the second awardee of the singing competition »Mirjam Helin« in Helsinki and there, he also gained the special prize, called »Performance of a Finnish Song By a Non-Finn«. In 2010, still during his studies, he had made his debut as Levi in Zajc’s »Nikola Šubić Zrinski« at the Croatian National Theatre in Zagreb and in the following year he sang the part of Escamillo (»Carmen«) in a production of the academy of music Zagreb at the Lisinski Concert Hall as well as at the Croatian National Theatre in Rijeka.

In 2013, Matija Meić debuted in Rossini’s »Il barbiere di Siviglia« at Croatian National Theatre in Zagreb, where he also sang the roles of Schaunard (»La Bohème«) and Belcore (»Lʼelisir dʼamore«). In addition, he covered the title role in Blagoje Bersa’s »Der Schuster von Delft« and took over the role of Guglielmo (»Così fan tutte«) at the Dubrovnik Summer Festival. In 2014, he sang the title role of »Don Giovanni« in a production of the University of Music and Performing Arts Vienna at the Schlosstheater Schönbrunn. Furthermore he performed the role of Don Alvaro in Rossini’s »Il viaggio a Reims« at the Bel Canto Festival in Bad Wilsbad.

Since the season 2016/2017 Matija Meić is a member of the ensemble at the Staatstheater am Gärtnerplatz in Munich, where he already sang Don Giovanni and Leporello (»Don Giovanni«), Peter (»Hansel and Gretel«), Dandini (»La Cenerentola«) under the direction of Brigitte Fassbaender as well as Sir William Cecil in Donizetti’s »Maria Stuarda« under the baton of Anthony Bramall, the principal conductor of the Staatstheater am Gärtnerplatz.
Download english biography as PDF file
Download german biography as PDF file
Download complete artist info as PDF file 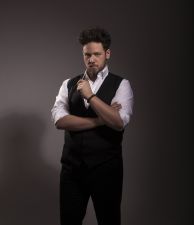