Born in Madrid, Guillermo García Calvo began his musical education at the age of seven. He concluded his musical studies at the University of Music in Vienna with a thesis on Parsifal and a performance of the Overture from Tannhäuser in the Großer Saal at the Musikverein Vienna.
He continued his studies as assistant of Iván Fischer and the Budapest Festival Orchestra, as well as assistant of Christian Thielemann for the production Der Ring des Nibelungen at the Bayreuther Festspiele. In 2003 he made his debut with a performance of Hansel and Gretel at the Schlosstheater Schönbrunn.

He has always maintained a strong relation with the Vienna State Opera ever since he started working there in 2004. He has conducted more than 200 performances at this renowned house including Die Zauberflöte, Macbeth, La traviata, Il barbiere di Siviglia, L’elisir d’amore, and Lucia di Lammermoor.
Furthermore, he is a welcome guest at major houses and festivals inside and outside of Europe, including the Opéra national de Paris (Don Giovanni), Deutsche Oper Berlin (u.a. Les pêcheurs de perles, Carmen, and Rigoletto), Gran Teatre del Liceu in Barcelona (La Gioconda), Opéra de Oviedo (Ring cycle, and Tristan und Isolde), Opéra de Nice (Il barbiere di Siviglia), Teatro Principal de Palma (Salome), Teatro Verdi di Trieste (La sonnambula), and the New National Theatre in Tokio (L’elisir d’amore). Furthermore, he conducted Sorozábal‘s Katiuska in Madrid, Turandot in Bukarest, El amor brujo in Florence, Stiffelio at the Verdi-Festival in Parma, Fascination Wagner on the occasion of the Internationale Maifestspiele at Staatstheater Wiesbaden, as well as a festive gala with Juan Diego Flórez at Müpa Bukarest.
In May 2016, he conducted the first recording of Ramón Carnicer’s Elena e Malvina together with the National Orchestra of Spain.

As from the 2017/18 season he started his tenure as musical director (Generalmusikdirektor) of the Theater Chemnitz and the Robert-Schumann-Philharmonie, where he already conducted i.a. Wagner’s Ring cycle, Parsifal, Die Meistersinger von Nürnberg, Hansel and Gretel, Die Fledermaus, Der Rosenkavalier, Un ballo in maschera, as well as numerous concerts.
Upcoming engagements at the Theater Chemnitz include, among others, the new productions Mefistofele (Boito), Carmen, and Lohengrin, as well as Wagner’s Ring cycle and Fidelio. In addition, he will conduct Il barbiere di Siviglia and Nabucco at Vienna’s State Opera, and Sorozábal’s Zarzuela at the Palau de les Arts in Valencia.

A Cosmopolitan at the Conductor's Stand: Versatile operas in Vienna, Valencia, and Chemnitz

In the first months of the new season, Guillermo García Calvo will prove his ability to conduct a multifaceted as well as challenging repertoire at great houses. First he will lead the premiere of the new production of Boito’s Mefistofele at Theater Chemnitz on September 28 (+ 5th of October), followed by Fidelio on October 20 (+ January 17 and February 21).
Afterwards, he will conduct Sorozábal’s La tabernara del Puerto at the Palau de les Arts in Valencia on these days: October 27/29/32; November 2 and 3.
Finally, Guillermo García Calvo will return to Vienna’s State Opera for Rossini’s Il barbiere de Siviglia. Performance on January 7 and 10​ 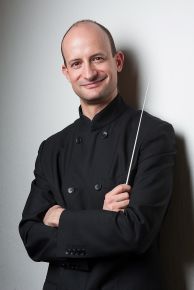