The Swiss soprano Flurina Stucki studied singing and music education in Basel in the class of Isolde Siebert and opera in Karlsruhe with Prof. Christiane Libor and Stephan Klemm. Flurina Stucki has been a member of the soloist ensemble at the Deutsche Oper Berlin since August 2018, initially as a scholarship holder and since the 2019/20 season in a permanent position.

After her debut in June 2018 as 1st Lady in The Magic Flute at the Deutsche Oper Berlin, she has since been entrusted with larger roles, such as Donna Anna/Don Giovanni, Clori in the world premiere of Zad Moultaka's Delirio, Konstanze/Entführung aus dem Serail, Rosalinde/Die Fledermaus, Grosse Hure in Rued Langgaard's Antichrist, Chrysothemis/Elektra, as well as Freia and Helmwige in the new production of  Wagner's Ring cycle. In spring 2021 she celebrated great success as a guest at the Theater Basel with the role of Christine Storch in Richard Strauss' Intermezzo.

Flurina Stucki has also a large song repertoire and performed Messiaen's Harawi together with John Parr in the series of songs and poets at the Deutsche Oper Berlin. The works with orchestra include Wagner's Wesendonck Lieder and Verdi's Messa da Requiem.

Upcoming engagements for 22/23 season include further thrilling role debuts such as Amelia/Boccanegra, Leonore/Fidelio and Elsa/Lohengrin at the Detsche Oper Berlin.  She will  be a guest in the scenic production of Britten's War Requiem at the Graz Opera where she also sings at the season opening concert Strauss' Four Last Songs with the Graz Philharmonic.

"Her husband´s savior" in Fidelio at the
Deutsche Oper Berlin

In January 23' Flurina Stucki makes her Leonore debut at the Deutsche Oper Berlin alongside Klaus Florian Vogt as Florestan in Beethoven's "Fidelio", in the new production by David Hermann and under the musical direction of Dominic Limburg: 7./14. January 2023.

It remains exciting for the young Swiss soprano as important role debuts follow: Amelia in Simone Boccanegra and Elsa in Lohengrin, Chrysothemis alongside Catherine Foster as Elektra and Donna Anna in Don Giovanni. She appears aslo in Rued Langgaard's opera Antichrist in an outstanding production by Ersan Mondtag and at the Staatstheater Karlsruhe she returns to the role of Chrysothemis in a revival of R. Strauss's popular opera Elektra. 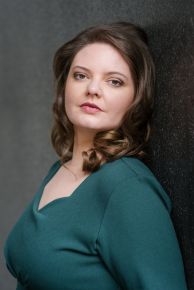