German mezzo-soprano Doris Soffel first studied violin at the Munich Academy of Music, then singing with the legendary Wagner/Strauss-soprano Marianne Schech. During her studies already, she made her debut at the Bayreuth Youth Festival, singing the leading role in Wagner´s Das Liebesverbot. Wolfgang Windgassen immediately engaged her at the Stuttgart opera ensemble. During the following years she could build up a broad repertoire, including protagonist roles like Carmen, Eboli/Don Carlo and Octavian/Der Rosenkavalier.

With her sensational success at Covent Garden as Sesto in Mozart´s Titus 1983 and as Orlofsky in Fledermaus (conductor Domingo) 1984 her world career was launched. Sawallisch gave her a lasting guest contract at the Bavarian State Opera, Munich. Since then she has made regular appearances in all big and important opera houses and concert halls of the world. In the 1980ies Doris Soffel became the only German mezzo-soprano with a world career in coloratura roles (belcanto-operas like L´Italiana  in Algeri and  La Cenerentola by Rossini as well as Donizetti and Bellini operas). Her cooperation with Joan Sutherland and Richard Bonynge has been well documented. In French repertoire she conquered the International audience not only with Carmen, but also with roles like Charlotte in Massenet’s Werther (with Alfredo Kraus) and Marguerite (Berlioz’ Damnation de Faust). Her exceptional musicality and vocal flexibility also led to cooperation with contemporary composers like Reimann, Henze and Penderecki. She had triumphant successes at world premieres, e.g. at the Munich Opera Festival in 1986 as Kassandra in Reimanns Troades.
With an extraordinary combination of passion, creativity and intelligence, demonstrated already in the Italian and French roles, Doris Soffel grew into one of the most significant Wagner- and Strauss singers of our time. Her early successes as Fricka/Das Rheingold and Die Walküre with Solti in Bayreuth and her Waltraute/Götterdämmerung with Mehta were confirmed later, at Carsens Cologne-Ring, at Audis Amsterdam Ring, at the Dresden Ring,  in 2010 at La Scala with Barenboim and in Berlin with Rattle. Her Kundry/Parsifal with Thielemann and her Ortrud/Lohengrin with Luisi are legendary. Doris Soffels artistic curiosity and permanent seeking of new challenges has also brought her in recent years to the Slavic repertoire: With Marfa in Mussorgski’s Khovanschina, Jezibaba/Rusalka and Kabanicha in Janacek’s Katia Kabanova the artist painted extraordinary and touching role portraits.
Today, with her strong vocal expressive power, with her charisma and with stunning acting performances, she celebrates one triumph after the other in strong Strauss roles like die Amme in Die Frau ohne Schatten (debut in Los Angeles 2004), Herodias/Salome and Klytämnestra/Elektra.

Doris Soffel has sung with legendary conductors such as von Karajan, Celebidache, Solti, Giulini, Sawallisch, Maazel, Mehta, Sinopoli, as well as Thielemann, Jordan, Runnicles, Nagano, Barenboim, Simone Young and Rattle. Working from the beginning of her career with such significant stage directors as Rennert, Ponnelle, Sir Peter Hall, Jonathan Miller, Friedrich and Kupfer had a great formative influence on her artistry and today she works with directors like Konwitschny, Carsen, Herheim, Loy, van Hove and Tcherniakov.

Doris Soffel also has an impressive career as concert- and Lied-singer, main focus on Mahler, Brahms and Strauss. A strong presence on Youtube and an extensive discography (more than 60 CDs) as well as many DVD productions testifies to the great versatility of the singer and to the beauty of her voice. She is German “Kammersängerin” and in 2001 she was awarded with the Royal Swedish Northern Star Order for her important artistic contributions to Swedish music life.

Previous plans for 2019/20 included a. Herodias / Salome under the direction of Kirill Petrenko at the Bayerische Staatsoper München, Klytämnestra / Elektra at the Palau de les Arts in Valencia with Marc Albrecht on the podium, Leokadja Begbick / Rise and Fall of the City of Mahagonny at the Nationale Opera Amsterdam *, Mme de Croissy / Dialogues des Carmélites at the Glyndebourne Festival and Liederabend “Grandeur und Dekadenz” on the occasion of the Münchner Opernfestspiele *.

In the 22/23 season, Soffel will take on the roles of Madame Louise/Oceane, Herodias/Salome and Adelaide/Arabella at the Deutsche Oper Berlin and Die Hexe/Königskinder at the De Nationale Opera in Amsterdam.

* cancelled due to Covid-19

Doris Soffel returns to Deutsche Oper Berlin in one of her signature roles, as Madame Louise in Glanert's "Oceane", on 06/11/13 January 2023. Alongside her, Andrew Harris will for the first time sing the role of Georg.
The production by Robert Carsen which was awarded "best world premiere of the year 2019" (International Opera Award) is conducted by Stephan Zilias.

Subsequently, Doris Soffel can be heard as Adelaide on the same stage in a new production of Arabella (Runnicles/Kratzer).
Premiere: 18th March, 2023 and further performances on 23/26/30 March as well as 02/06 April. 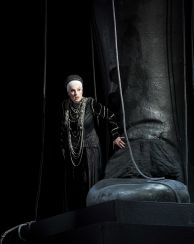 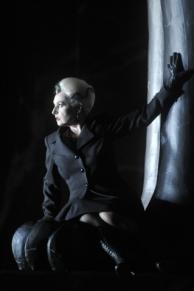 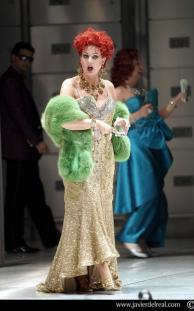 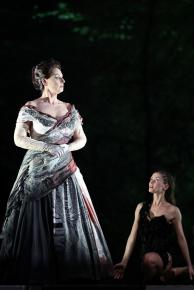 
"Doris Soffel is able to draw attention to herself. When she is singing, but also when she is silent. Pure class."


"invincible as a singer and actress"