Dietrich von Grebmer was born in Bruneck (Südtirol) and today lives in Berlin. Following his studies at the Mozarteum in Salzburg, his career began as an assistant at the Salzburg Festival, at the opera house in Zurich, and at the Schaubühne in Berlin. He worked as a stage- and costume designer in the fields of opera, operetta, musical, and drama at various opera houses and theaters throughout Germany, Austria, France, and Holland.

His engagements include the Nationaltheater in Weimar (Wozzeck, Die Wahlverwandschaften, Liebes Leid und Lust), the state theaters of Wiesbaden and Mainz  (Ritter Blaubart, Orpheus in der Unterwelt), the Schaubühne Berlin (Der nackte Michelangelo), and the Nationale Reisopera (Bluebeard’s Castle/Erwartung, both with George Tabori).

In the „Mozart Year 2006“, he was engaged at the Vienna State Opera for Bastien und Bastienne as well as being responsible for the costume design at a Mozart potpourri at the Vienna Opera Ball. Further engagements led him to cities such as Leipzig, Meiningen, Dresden, Linz, Vienna, Krefeld, Düsseldorf, Heidelberg, and Cologne.

Dietrich von Grebmer repeatedly collaborated with Brigitte Fassbaender. Their collaborations include productions such as La Cenerentola in Coburg as well as at the Gärtnerplatztheater in Munich, Arabella at the Opera du Rhin Strasbourg, Die Fledermaus at the Niedersächsische Staatsoper Hannover, and Der Rosenkavalier at Landestheater Innsbruck and at the festival in Baden-Baden.

Productions of the past seasons also include Die Fledermaus, Der Zarewitsch und Die lustige Witwe at the Musikalische Komödie at Opera Leipzig, all directed by Volker Vogel, as well as the productions by Brigitte Fassbaender of La Cenerentola at Gärtnerplatztheater Munich and Il barbiere di Siviglia at the Bregenz Festival.

Projects in the season 2018/19 Der Freischütz at Anhaltisches Theater Dessau and Die Entführung aus dem Serail at Theater Nordhausen, each directed by Saskia Kuhlmann, as well as the sets and costumes for Brigitte Fassbaender’s new production of Der junge Lord at Gärtnerplatztheater Munich. 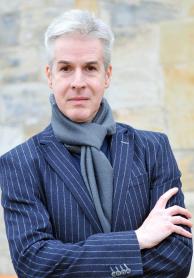