The young Berliner, Alexandra Ionis, currently lives in her home city and since October 2014 receives training by Kammersängerin Deborah Polaski. Her singing studies also led her to the Conservatorio di musica Giuseppe Verdi in Milan where she was trained by Daniela Uccello. In Rome, where Alexandra Ionis became a member of the International Opera Studio at the Accademia nazionale di Santa Cecilia, she received further important influence from Renata Scotto and worked with the pianist Fabio Centanni, among others.

In 2014, her collaboration with renowned Italian pianist Sergio Lattes began; a collaboration dedicated primarily to the interpretation of the Kunstlied. The first Liederabend, containing works by Shostakovich and Ravel, brought her to the philharmonic hall of Messina and was followed by a Lied-cycle with works by Tchaikovsky and Rachmaninoff in Milan.
In 2016, Alexandra Ionis debuted next to Ricarda Merbeth and Laura Aikin in R. Strauss‘  Die ägyptische Helena at the Deutsche Oper Berlin under the baton of Andrew Litton (Stage Direction: Marco Arturo Marelli). The performance was followed by another important opera project in the form of Aribert Reimann’s Melusine/Pythia under Errico Fresis and Frank Hilbrich at the Universität der Künste Berlin.

Opera engagements of past seasons include Roßweiße in Die Walküre under the baton of Stefan Reck at Teatro Petruzzelli in Bari and under Juraj Valčuha at Teatro di San Carlo in Naples, Death in Venice under Donald Runnicles and Graham Vick as well as Il viaggio a Reims/Maddalena and Il trovatore, both under Giacomo Sagripanti, at Deutsche Oper Berlin, Widmann’s Babylon and Reimann’s Gespenstersonate/Mumie at Staatsoper Unter den Linden Berlin, Maddalena at Dresden’s Semperoper, Annina/Der Rosenkavalier, Ulrica/Un ballo in maschera and Marcellina/Le nozze di Figaro at Opera Chemnitz, as well as several roles in the production Die Schneekönigin at Deutsche Oper Berlin’s Tischlerei stage.

In the season 2021/22 Alexandra Ionis sang Annina/Der Rosenkavalier at Staatsoper Unter den Linden Berlin (Simone Young/André Heller), Margret/Wozzeck at Palau de les Arts in Valencia (under James Gaffigan) and could be seen and heard in the revivals of Viaggio a Reims/Maddalena and of Schneekönigin (Tischlerei) at Deutsche Oper Berlin, as well as in the world premiere of Péter Eötvös’ opera Sleepless at Staatsoper Unter den Linden with additional performances in Geneva and Budapest.
In addition she could be heard in a staged project with music by Zimmermann (staging by Calixto Bieito) with the Gürzenich-Orchester under François-Xavier Roth in Philharmonie Cologne and the Elbphilharmonie Hamburg.

In the current season she will sing Schwertleite in the new Ring production at Staatsoper Unter den Linden Berlin (staged by Dmitri Tcherniakov) under the musical direction of Christian Thielemann and Thomas Guggeis and will be back on stage in the revival of Die Schneekönigin at Deutsche Oper Berlin's Tischlerei.

Future projects include concert performances of Zimmermann's Die Soldaten/Stolzius' Mutter with the Gürzenich-Orchester and François-Xavier Roth (staging: Calixto Bieito) in Cologne, Hamburg and Paris, as well as of Elektra/1. Magd with the Berliner Philharmoniker under Kirill Petrenko with concerts in Berlin and Baden-Baden.

As of 2018, Alexandra Ionis is a scholarship holder of the Richard-Wagner-Verband.

A regular guest in Berlin!

Alexandra Ionis sings regularly at both major opera houses in Berlin and could most recently be heard in "Der Rosenkavalier", Rossini's "Il Viaggio a Reims" as well as in the world premiere of Peter Eötvös' new opera "Sleepless".

In this season she can again be found on Berlin's stages, first as Schwertleite/Die Walküre in the new Ring at Staatsoper Unter den Linden, staged by Dmitri Tcherniakov and conducted by Christian Thielemann and Thomas Guggeis (Premiere on October 3rd, 2022)

Subsequently, and season appropriate, she will return to Deutsche Oper Berlin for the revival of the highly successful production "Die Schneekönigin" (S. Penderbayne) on December 4th, 2022, in which she sings no less than four roles. 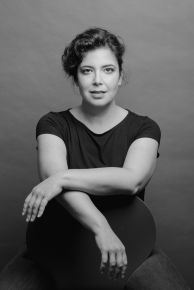 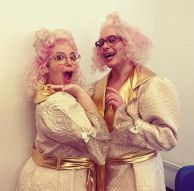 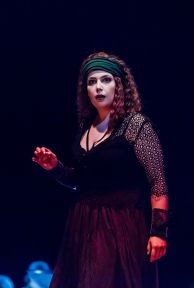